Lion Tom Gray and his guide dog, Jackson, were fixtures at Sanibel-Captiva Lions club events for many years. Tom also lived on the Island at below-market-rate housing, and could often be seen walking with his trusted friend and companion, Jackson.

Indeed, in a recent “Thank You” letter to Sanibel-Captiva Lions President, Kurt Peters, Tom said, “Jackson and I have walked side by side nearly 9,000 miles in the eight years that we have been together”.

Now, Jackson’s legs and hips are tired and he can no longer climb stairs. So Jackson has been retired and lives in Michigan where he found a loving and welcoming home with Tom’s sister, Terry and her husband.

All of which brings us to Larry, Tom’s newly graduated guide dog from Southeastern GuideDogs. Larry is a black Labrador who, according to Tom, is fun-loving and social.

Back home in South Lyon, Michigan, Tom plans to take Labrador Larry for long walks on nature trails and wooded walks, and to his buddy’s farm where Larry can be free to play and relax when he’s not working.

Sanibel-Captiva Lions Club’s charitable donations have been supporting Southeastern GuideDogs for many years, and we intend to continue to support this eminently worthwhile program. Our Club has also been helping Tom Gray with guide dog maintenance bills over the years…we plan to continue that program, as well.

So Happy Trails to Tom and Larry. And a big “Well Done” to Southeastern GuideDogs for giving courage and independence to so many sight-impaired people. 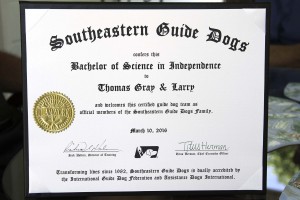