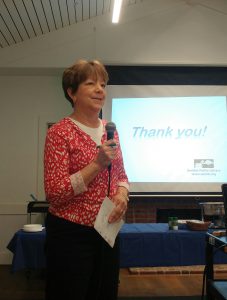 The library was built 25 years ago with the computer lab added 12 years ago. Obsolete infrastructure and responding to the ever-changing needs of users are two areas the Library Board of Commissioners analyzed when it started planning the major upgrade in 2015.

“It’s our goal to be finished in early fall, but there will be an announcement when we know for sure,” said Muhundro.

Your Library Reimagined plans include rearranging the floor plan for greater service and to include more modular options. There will be both behind-the-scenes remodeling to maximize efficiency and lower operating costs, plus functional updates to both public and staff spaces.

There will also be a new Archives Room with digitization capabilities for easier scanning of local and historic photos. A bike-up and walk-up book drop off box will be added. However, Muhundro said the expanded reading porch has a lot of library patrons excited. “You can now sit out there quietly, without the several loud air conditioning units kicking on,” she said.

Lions also learned the library has been recognized as one of the best libraries in the country and named a five-star library by the Library Journal, which awards rankings to 260 libraries out of more than 7,000 nationwide. The Sanibel Library holds an integral place in the community. It’s a place where islanders and visitors go to read, learn and interact.

“It’s all due to the support of our community, which we appreciate,” said Muhundro. “We must also contribute the library’s success to our great staff.”

The next guest speaker will be Sanibel Captiva Conservation Foundation Education Director Kristie Anders on Wednesday, July 18. Meetings start with cocktails and appetizers at 6 p.m. and dinner, catered by Sanibel Catering Co., is served at 7 p.m. Visiting Lions and anyone interested in joining are welcome. Those wishing to have dinner should contact Lion Steve Schulz at [email protected].