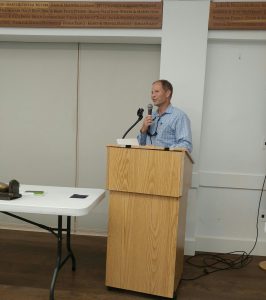 South Florida Water Management District Board Chair and Sanibel resident Chauncey Goss was the guest speaker at the Sanibel Captiva Lions Club April 17 dinner meeting. He discussed the history of the SFWMD, where it is going and the direction of its new board with a large crowd of interested Lions and guests.

Headquartered in West Palm Beach, SFWMD is the oldest and largest of the state’s five water management districts, serving 41 percent of the state’s population or 8.1 million people. It has 1,500 staff members and operates on an $800 million budget, of which $277 million is from the ad valorem (property) tax from within its 16-county jurisdiction.

While flood control is the primary responsibility of the SFWMD, it has become a challenge in recent years due to rapid population growth. “We do a really good job with flood control, especially in Collier County where flooding is a bigger issue than (on Sanibel & Captiva),” Goss said.

Florida relies on tourism to drive its economy, which means it is dependent on the environment, making water quality issues more than an environmental problem, but an economic and even a health crisis. “Our water projects are very important to us,” Goss said as he briefly discussed the EAA and C43 reservoir projects, as well as the expensive Comprehensive Everglades Restoration Plan.

“Everglades restoration is the largest environmental restoration project in the nation’s history,” said Goss. “It is one of our key initiatives.”

To learn more about the SFWMD, visit www.sfwmd.gov.