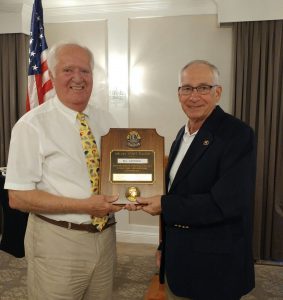 The Sanibel and Captiva Lions Club installed Bill Sartoris as the club president for the 2019-2010 fiscal year at the annual installation dinner Wednesday, May 1, at Sundial Beach Resort & Spa. Sartoris will preside at all regular and special meetings, as well as ensure effective operations of the club as its president.

“I look forward to leading our club in the next fiscal year, growing our membership and continuing our commitment to serving the community,” said Lion Bill, who has owned a home on Sanibel for nearly 20 years with his wife Karen and became a full-time resident four years ago.

Lion Bill is active in the club’s vision screening program and has been co-chair of the Lions Arts and Crafts Fair for the past four years. He was also the recipient of the Melvin Jones Fellowship Award, one way the club recognizes the outstanding achievement of its members. He accepted the award at the annual installation dinner.

Lion Steve Schulz was installed the club’s first vice-president, who substitutes for the president as needed and is an active member of the district governor’s advisory committee. Lion Steve was also installed as the Lion Tamer, which cares for the display and storage of the club’s property, as well as greets guests and members. 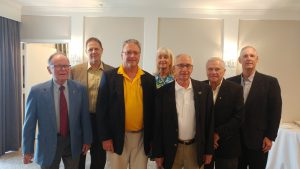 The club installed Lion Rick Wagner as treasurer and Lion Jeff MacDonald as secretary for the 2019-20 fiscal year. Installation of Board Members included Lions Valerie Tutor, Cliff Nolan, George Veillette and Jack Campbell. Lion Bert Jenks was installed as the Tail Twister, someone who promotes harmony, fellowship, fun and enthusiasm among club members and assists with fund raising.

Since the club’s chartering in 1967, its members have worked on a variety of projects in the local community, such as health screenings, Recycle for Sight, an Arts and Crafts Fair and Christmas tree sale. Proceeds from the past fundraising events have gone, in part, to the Bailey Scholarship Fund, Lighthouse of Southwest Florida, Trailways Camp organized by Lion Jerry Miller and his wife Sharon, Sanibel School Fund and Islands Night.

“Where there’s a need, there’s a Lion,” said Lion Steve. “We’re men and women serving in more than 200 countries and geographic areas as part of the largest service club organization in the world, Lions Club International. We work to make a difference in our local communities.”

The Sanibel Captiva Lions Club meets on the third Wednesday of the month throughout the summer season at the Sanibel Community House. Meetings begin with cocktails and appetizers at 6 p.m. and dinner, catered by Sanibel Catering Company, is served at 7 p.m. A guest speaker is hosted each month.