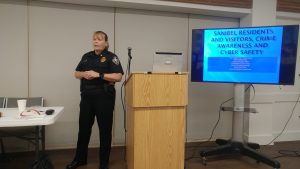 “We are a safe city,” said Towler. “Recent reports show crime is down 31 percent, but our residents are still at risk for various crimes.”

Lions heard about defending against identity theft and scams, as well as the importance of locking doors. Towler noted that most crimes on the island are from criminals finding unlocked doors on houses and vehicles. She also stressed the importance of recording serial numbers and storing valuables in uncommon places.

“We are 100 percent responsive,” said Towler, who has been with SPD for 11 years and giving Crime Prevention presentations for the past six years. “I don’t want anyone on Sanibel to be a victim. It’s why I do this.”

The Sanibel Captiva Lions meet the first and third Wednesday of each month at the Sanibel Community House. Visiting Lions are welcome. To learn more about becoming a Lion, contact Membership Chairman Lion Steve Schulz at [email protected] 239-233-6261 or visit sanibelcaptivalions.org.