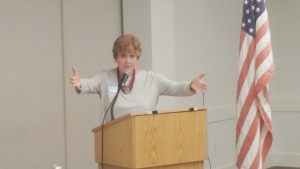 Retired U.S. Navy Captain Nori Ann Reed had a great love for being at sea and for her ship, U.S.S. Detroit. Reed was the first woman to command three Navy ships and among the first assigned aboard a ship. She shared her poignant story at the Sanibel Captiva Lions Club dinner meeting.

Reed looked back on her beloved ship, once named the worst of the fleet, and the 9-11 attacks. “It began as a beautiful day, when the weather was summer-like but with a fall crispness in the air,” she described. Reed was Commanding Officer of the Detroit at the time and in home port in New Jersey. She could see the World Trade Towers and Statue of Liberty from the ship.

“She was a big ship at 800 feet long and very, very heavy,” Reed said of the Detroit. “I carried ammo, food, fuel and any supplies needed on other ships. If you needed strawberries, I was your girl. If you needed an engine, I had that too.”

The Detroit was known as a cantankerous ship, taking a long four days before ‘waking up’ and breaking down at inopportune times. However on that fateful day, Reed – with half a crew – was able to get the Detroit underway in just a matter of hours. “I saw young men and women step up and prove themselves over and over,” said Reed. “I couldn’t be more proud of them.”

The now decommissioned Detroit went from worst to first that day. “Before she could be disassembled, a tiny hurricane blew by and she hit another ship. She did not go quietly,” quipped Reed. In her 30 years of service in the Navy, Reed also operated personnel ships and aircraft over 10 countries and 2.5 million square miles of water during Operation Iraqi Freedom and Operation Enduring Freedom.

Reed, who moved to Sanibel as a teenager, returned to the island and volunteers for multiple organizations. She thanked the Lions for their service during the 10K Race 4 F.I.S.H., of which she is the volunteer coordinator.

The next guest speaker, Lt. Towler of the Sanibel Police Department, will speak on personal safety April 18 at the Sanibel Community House. Visiting Lions are welcome. To learn more about becoming a Lion, contact Membership Chairman Lion Steve Schulz at [email protected] or 239-233-6261 or visit sanibelcaptivalions.org.