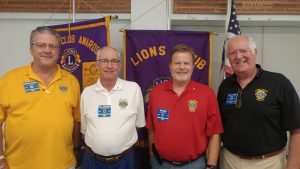 “I am looking forward to leading various projects and continuing the Sanibel Captiva Lion Club’s commitment to serving the community,” said Kern, who was born and raised on Long Island, N.Y., but has been a year-round Sanibel resident since 2004.

Lion Bob spent time in the construction world, primarily involved as an iron worker and sub-contractor erecting structural steel and precast concrete in the Chicago area. He and his wife Lyn, a new Lion, moved to Minneapolis, where he worked in the computer business with a world-wide territory. Lion Bob and Lyn have four children and are very involved in life on Sanibel.

Lion Jon grew up in Massachusetts and attended Massachusetts Maritime Academy, after which he spent 46 years at sea. Lion Jon first came to Sanibel in 1976 and purchased a condo with his brother for a winter home. He also purchased properties in Massachusetts and the Lee County area. In 2000, he was fortunate enough to marry a woman he met years earlier in Singapore and had been his friend. They live in a home he purchased in 1994 and are taking a former neighbor’s advice to travel while they are young enough to do so.

Lion Steve has been a full-time Sanibel resident for the past eight years, but purchased his island home in 2000. The Cincinnati, Ohio, native earned a bachelor’s degree in accounting and a masters in speech, communication and theater. He resided in Greensboro, N.C., and Arizona for 13 years each. Lion Steve has been with Best Buy for the past 23 years and currently handles merchandising for the Coconut Point Mall location. His wife, Lori, is a real estate broker with SanCap Gateway Realty, and their son, Joe, works as bartender and server at The Sandbar.

Lion Bill and his wife Karen have owned a house on Sanibel for almost 20 years. They stopped being snow birds and became full-time residents 3 years ago. Prior to retiring Bill was a faculty member in the Kelley School of Business at Indiana University. He also was a faculty member at the University of Kentucky and worked for NASA for one year. Lion Bill has been active on Sanibel and is a past president of the Sanibel Bicycle Club and of the Sanibel Community Association. He is active in the Lions vision screening program and has been co-chair of the Sanibel Captiva Lions Club Arts and Crafts Fair for the last three years. Lion Bill has one son who resides in Colorado.

The club also elected Lion Rick Wagner as treasurer for the 2018-19 fiscal year. Lion Rick
runs the Recycle For Sight program and acts as the club’s webmaster. He and his wife, Judy, moved to Sanibel from Allentown, Pa., in 2015 and have become very active in the community. Lion Rick spent most of his professional career working for a global industrial gas and chemical company serving in varied financial, accounting and treasury management roles.

Since the club’s chartering in 1967, its members have worked on a variety of projects in the local community, such as health screenings, Recycle For Sight, an Arts and Crafts Fair and Christmas tree sale. Proceeds from the past fundraising events have gone, in part, to the Bailey Scholarship Fund, Lighthouse of Southwest Florida, Trailways Camp, Sanibel School Fund and Islands Night.

“Where there’s a need, there’s a Lion,” said Lion Jon. “We’re men and women serving in more than 200 countries and geographic areas as part of the largest service club organization in the world, Lions Club International. We work to make a difference in our local communities.”

The Sanibel Captiva Lions Club meets on the third Wednesday of the month at Sanibel Community House. Meeting begins with cocktails and appetizers at 6 p.m. and dinner, catered by Sanibel Catering Co., is served at 7 p.m. A delightful guest speaker is hosted each month.

Visiting Lions and anyone interested in becoming a member are always welcome.