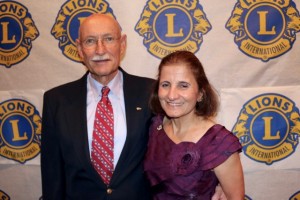 Lion Past President, Kurt Peters, did not have an easy year. In addition to the usual pesky problems of a Lions club presidency, Kurt endured a serious and almost fatal operation to replace a faulty heart valve. His doctors told him not to return to the president’s job because of the potential strain on his repaired heart. But Kurt, not one to leave a job half finished, came back in the Fall to a club that needed and respected his leadership.

And, as if Kurt’s leadership abilities were not enough, we got a “twofer” package with the addition of Kurt’s lovely wife, lion Nilou. Nilou and Kurt filled many important positions in the club during his tenure. But probably the most important, and certainly  the most lucrative, team effort was running the Silent Auction and Raffle at the Arts and Crafts Fair.

We all hope to leave the world a better place than we found it. On a much smaller, but more personal scale, Lion Kurt has done that for our club this year.

Thanks, Kurt! and thanks, Nilou!