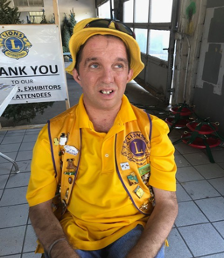 Benjamin Gerald Miller reunited with his brother Robert in the arms of our Lord on Monday, April 20, 2020. He was born on May 19, 1975 in Lansing, Michigan and is survived by his mother Sharon; his father Jerry; his sister Kristina and her husband Alex; his brother Lewis and his wife Michelle; 4 nieces, Kelsey, Ella, Julia and Helen; his nephew Hayden and a large extended family. His brother Robert passed in September 2005.

Benjamin and his brother Robert are the namesakes for whom Trailways Camps, serving adults with special needs and providing respite for their families, were founded first in Texas and then in SW Florida by the Miller Family. 30 camps, 6 reunion gatherings, 4 Family Fun Days and leadership for the 2018 and 2019 Night to Shine through Sanibel Community Church (sponsored by the Tim Tebow Foundation) have been provided for an estimated 1100 adults since the Millers moved to Sanibel in 2010.

Benjamin fought a lifelong battle with what is now known as Zellweger Spectrum Disease. It is a multisystem disorder that includes destruction of myelin sheath, can include deteriorating white matter disease, adrenal failure, organ failure and multiple sensory declines. He was the oldest known prolonged survivor known to researchers in North and South America and in Amsterdam, with most individuals passing as newborns or prior to the age of 10. At his death Ben is a brain and tissue donor.

Benjamin was a joy! “His incredibly huge mission was to love God and love people.” Every day was a new opportunity to bless. He loved his life, his opportunity to live “independently” with supports in his Community Housing Resources apartment, prayer breakfast and worship services with his Christian family and friends at Sanibel Community Church, his work at Goodwill, the opportunity to win blue and red ribbons through Special Olympics competitions, providing services for others through membership in the Sanibel-Captiva Lion’s Club, and his leadership role with Trailways Campers. He loved living in his community where, accompanied by his companion Jack, he participated actively. His amazing friend and helper Annie Williams provided personal support for nearly 9 years—He loved her unconditionally. Benjamin loved his family beyond all earthly treasures and was famous for his version of the “I AM SPECIAL” song.

A celebration of his life will take place in late summer or Fall at Sanibel Community church as possible based upon the coronavirus 19 response guideline schedule. Graveside internment services will be held in Michigan. Memorial contributions may be made to the Robert V. & Benjamin G. Miller Fund/SW Florida Community Foundation directly on the website www.trailwayscamps.org home page, or by U.S. mail to 2031 Jackson St., Suite 100, Fort Myers, Florida 33901.