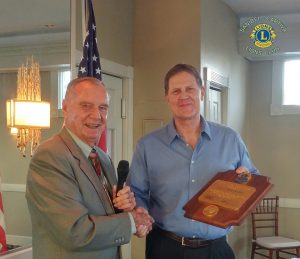 The Sanibel Captiva Lions Club announced the recipient of the Melvin Jones Fellowship Award, one way the club recognizes the outstanding achievement of its members. Lion Jeff McDonald accepted the award at the annual installation dinner Wednesday, May 2, at Casa Ybel Resort’s Thistle Lodge Beachfront Restaurant.

“I am proud to present this award for the 95thtime to a very worthy recipient,” said Lion Bert Jenks. “In the three-and-a-half years Jeff has been a member, he has been active in almost all our activities.”

McDonald, a Sanibel resident, serves as co-chair of the popular Arts and Crafts Fair and the club secretary. The Lions Club International was founded June 7, 1917 by Melvin Jones and his associates, originally named The Business Circle of Chicago and took the name of Lions after a group invited them to join.

The club’s purpose was the betterment of their communities and world at large. It became international with a club in Windsor, Canada just three years after forming. Membership grew to 60,000 with 1,183 clubs in 10 years. Today, Lions Club International has more than 1.5 million members in more than 200 countries – making it the world’s largest service organization.

It was in 1925 that Lions made their commitment to the blind at the urging of Helen Keller. The Sanibel Captiva Lions continue that commitment through programs such as Recycle for Sight and supporting Southeastern Guide Dogs. In it’s 51 years of existence, the Sanibel Captiva Lions have had 94 members selected for the Melvin Jones Fellowship Award, of which 20 are still active members.

“I am honored to be recognized by my fellow Lions who have previously received this award,” said McDonald. “We strive to make a difference everyday and our service is as diverse as our members.”

To learn more about the Sanibel Captiva Lions, visit sanibelcaptivalions.org. Anyone interested in becoming a Lion, should contact Membership Chairman Lion Steve Schulz at [email protected] 239-233-6261.