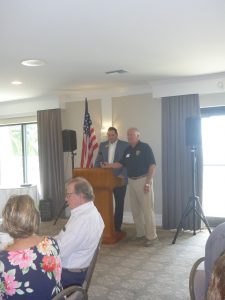 The Sanibel-Captiva Lions Club sponsored the Sanibel & Captiva Islands Chamber of Commerce monthly luncheon, a networking opportunity for members on the second Tuesday of each month. It features a guest speaker, in addition to refreshments, a meal and dessert at a different location.

“The islands have a wonderful business community, which regularly shows its support as sponsors and through volunteerism,” said Club President Lion Bob Kern. “We were delighted to be a sponsor of the Chamber’s luncheon.”

The Sanibel-Captiva Lions Club has reached a golden milestone – 50 years as an active group determined to make a difference in their island community. Since the club’s chartering in December 1967, its members have diligently worked on a variety of projects and developed many prosperous fundraisers such as selling Christmas Trees and an Arts & Crafts Fair.

Sight is undoubtedly one of the Lion’s defining causes. SanCap Lions collect thousands of used eyeglasses each year and offer complimentary glaucoma and retinal screenings. The Lions Club International, simultaneously celebrating its 100th anniversary, is the world’s largest service club with a network of 1.4 million men and women worldwide. Lions serve where they live, as well as globally, and have fun doing it.

The Sanibel-Captiva Lions meet the first and third Wednesday of each month at the Sanibel Community House, where it was chartered all those years ago.