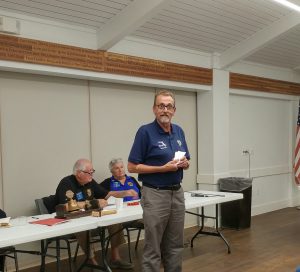 Those goals include growing membership, retaining members and thinking beyond the horizon. Sanibel-Captiva Lions Club is looking to the future, as well as celebrating its past – 50 years as an active group determined to make a difference in their island community and across the globe.

Sight is undoubtedly one of the Lion’s defining causes. The SanCap Lions collect thousands of used eyeglasses each year as part of its Recycle for Sight program. The club has long offered complimentary health screenings for adults and raised funds for charity through its Arts & Crafts Fair, Christmas tree sale and more.

“We are proud of our club’s 50 years of service to the community and grateful to everyone who contributes to our important work,” said SanCap Club President Lion Bob Kern. “You are truly making a difference in many lives.”

The Lions Club International, which is simultaneously celebrating its 100th anniversary, is the world’s largest service organization with a network of 1.5 million men and women worldwide. Lion Kunka pointed out women are the single fastest growing segment of members. He has been a Lion for 44 years, joining on his 18th birthday, and his wife Jan is also an active Lion.

Lion Kunka will be a second generation District Governor as his father served in 1975-76. He is a Melvin Jones Fellow, a life member of the Florida Lions Foundation for the Blind and has received a Presidential Certificate of Appreciation and a Presidential Excellence Medal. He was named Lion of the Year by the Past District Governors Association.

“We appreciate Lions Chip and Jan visiting us,” said Kern. “They are always full of energy and have a true passion for the Lions. We also send our thoughts out to District Governor Lion Ken, who recently suffered a heart attack which kept him from visiting us. He is under care and reportedly doing well.”