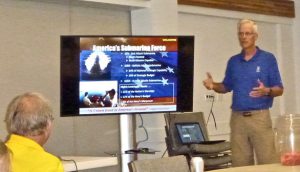 Prominent American naval leaders persuaded the Navy to acquire its first submarine at the turn of the century. They recognized the submersible as a real threat to international surface forces. Inventors John Holland and Simon Lake competed their submarine designs and Holland won. His 64-ton Holland VI was purchased for $150,000 in April 1900 by the Navy.

Throughout the next century, submarines would play vital roles in major wars and evolve into a strategic nuclear deterrence. Today, the Navy has developed the first submersible without a periscope, the VIRGINIA-class attack submarine. “Submarines are the most complicated thing ever built, yet the Navy teaches average people how to operate them,” said Ressel. “I think that makes the Navy the very best educator.”

“The history of the submarine is simply fascinating, especially since we have many Lions who served in the Navy, just not on a submersible,” said Lion Bob Kern, who organizes the guest speakers. “We appreciate Chip taking his time to talk to us about these incredible machines.”

To learn more about the submarine, visit www.navy.mil and select submarine centennial. The Lions meet on the first and third Wednesday of the month at 6 p.m. at the Sanibel Community House. Upcoming speakers include the Southeastern Guide Dogs March 7 and Captain Nori Ann Reed, U.S. Navy Ret., on March 21. Visiting Lions welcome. For more information, visit sanibelcaptivalions.org