The Sanibel-Captiva Lions Club welcomed Steven Schulz as its newest member during its meeting, Wednesday, August 16, at the Sanibel Community House. 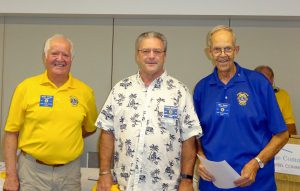 In accepting membership, inductee Schulz said he will focus his energies on “growing the membership–to bring new blood into the organization.” He praised the organization for its “strong community spirit, especially in helping people with sight problems.”

Originally from Cincinnati, Ohio, Schulz earned a Bachelor’s Degree in Accounting and a Master’s Degree in Theater at the University of Cincinnati. He is employed by the Gulf Coast Best Buy in Ft. Myers, where he is in charge of inventory. A full-time Island resident for the past eight years, Schulz is an active parishioner at St. Isabel’s Catholic Church, where he sings in the choir and is a member of the Men’s Society. His wife, Lori, is a real estate broker and owner of San Cap Gateway Realty.

Kern said Schulz will be an active participant in the Sanibel-Captiva Lions Club, “because he is a worker bee.”

The largest service organization in the world, the International Lions Club has 1.4 million members worldwide. Since its establishment in 1917, in Chicago, Illinois, the group has been dedicated to serve, according to its mission, “wherever need exists.”

“The Lions Club focuses especially on help for the visually impaired, to honor a commitment that it made in 1925 to Helen Keller,” Kern said. “She called us the ‘Knights of the Blind.’”

For more information on the Sanibel-Captiva Lions Club, visit sanibelcaptivalions.org.